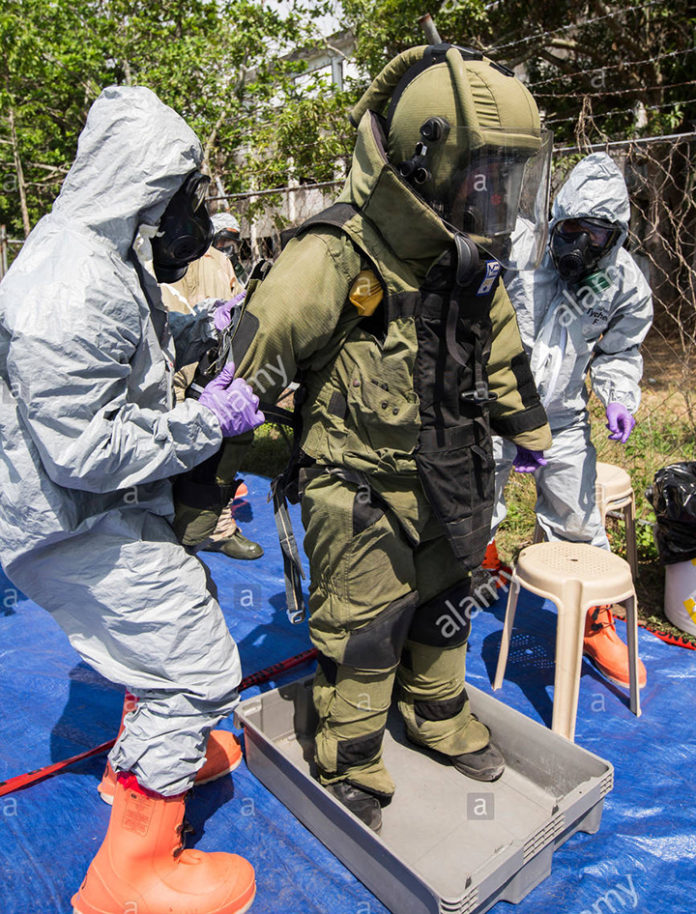 An Army CBRN trooper sharpens his skills in chemical, biological, radiological and nuclear warfare at a local camp.

The Philippine Army deployed its elite chemical, biological, radiological and nuclear (CBRN) units in the fight to contain the spread of the coronavirus 2019 (Covid-19).

In what is considered as their first full-scale deployment, the CBRN troops would bring with them their knowledge and training in dealing with biological and nuclear attacks, along with their special suits and other equipment.

This time, however, they will have to deal with the control and  neutralization of a virulent virus that has infected hundreds of Filipinos across various parts of the country.

The deployment of the units, just one among the two specialized services of the Army tapped to deal with the Covid-19,  was disclosed on Monday by Army chief Lt. Gen. Gilbert Gapay during the Army’s celebration of its 123rd foundation at Fort Bonifacio in Taguig City.

“We live in dangerous times. The current novel coronavirus, or Covid-19, has taken the world and our country by storm. This is a new threat being confronted by the Army, and along with the might of our government, we are already deployed—nationwide—to contain the virus and protect our people,” Gapay said.

“Our Chemical, Biological, Radiological, and Nuclear arm, along with the rest of our capabilities, is being fully utilized 24/7 to arrest the spread of the virus, and restore normalcy,” he added.

Soldiers who have been tasked to enforce the enhanced community quarantine in Luzon, especially those units manning checkpoints in Metro Manila go through the CBRN units for disinfection and quarantine in order to ensure their safety.

In leading the celebration of the Army’s anniversary, Gapay recalled the patriotism of its members.

“From our fight for freedom, which birthed our then Revolutionary Army in 1897, to the Second World War, Korean War, and Vietnam War, where we fought alongside our allies of the Free World; to our battles against the secessionist groups in Mindanao and the Communist terrorist group, until this day against hybrid threats, and man-made and natural calamities. In all these battles of the past 123 years, the Philippine Army has been at the forefront and the embodiment of patriotism,” Gapay said.

The Army chief said that for the past 100 days, the Army has neutralized 44 rebel high-value targets, including Julius Giron, head of the NPA’s Military Commission, and 836 other NPA members.

Meanwhile, the Navy has continued to conduct maritime patrols along with the Coast Guard off the coast of Manila to intercept and deny entry and exit of commercial passenger watercraft to and from the vicinity of Manila Bay in line with the Luzon-wide enforced quarantine.

“This to ensure that people from outside NCR [National Capital Region] do not enter NCR by sea and vice versa, preventing people coming in or going out thereby risking the spread of the virus,” said Navy Captain Lemuel Espartinez, the designated commander of Naval Task Group-NCR.