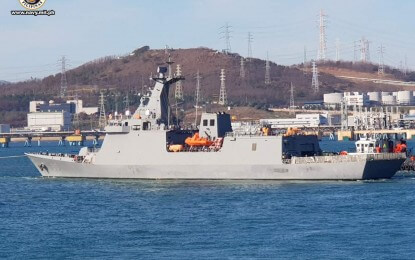 The 107.5-meter long frigate will sail towards the open waters off Ulsan, Busan, and Mokpo in South Korea to measure its performance and general seaworthiness.

Representatives from international provider of classification, compliance and consultancy services to the marine industry, Lloyd’s Register of Shipping will witness the activity to ensure that the ship’s construction has met the required standards.

Roxas said the sea trials are the last phase of construction prior to the frigate’s delivery to the Philippines scheduled tentatively in April or May 2020.

This will take place six months after the vessel was launched at the HHI shipyard for the first time at HHI shipyard in Ulsan last May 23.

“The PHP8-billion warship is a big-ticket acquisition of the Armed Forces of the Philippines that is poised to be the benchmark of PN’s transformation journey,” she said.

The contract for the two ships is placed at PHP16 billion with another PHP2 billion for weapon systems and munitions.

The activity signifies that the PN is inching closer to its dream of acquiring highly capable warships.

Its crew and maintenance personnel are currently undergoing training in the Republic of Korea.

Roxas said the BRP Jose Rizal provides leverage for the Navy’s bid of becoming a stronger and more credible force that the Philippines as a maritime nation can be proud of. (PNA)