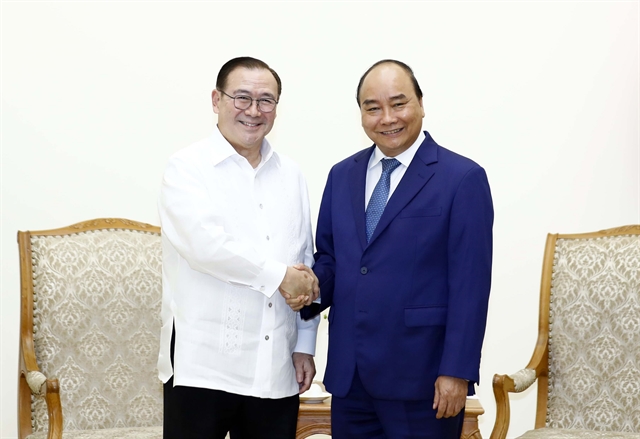 HÀ NỘI — Việt Nam has great respect for the role of the Philippines in ASEAN and wishes to boost relations with the country, Prime Minister Nguyễn Xuân Phúc has said.

He made the remarks while hosting Secretary of Foreign Affairs of the Philippines Teodoro Lopez Locsin in Hà Nội on Monday.

Secretary Locsin said he had successful talks with Foreign Minister Phạm Bình Minh, describing it as evidence of the close relations between the two countries.

He said the Philippines and Việt Nam are the two most dynamic economies in Southeast Asia so the countries should work harder to lead the region.

Apart from economic ties, the countries should intensify defence and security co-operation, he said.

He said his country sees signing an agreement on imports and exports of fruits and farm products as a top priority.

The PM said Việt Nam will support the Philippines in working as the ASEAN-China co-ordinator in 2019-21, expecting the Philippines to work closely with Việt Nam during the latter’s ASEAN 2020 Chairmanship and membership of the UN Security Council in 2020-21.

PM Phúc noted the Philippines’s positive contributions to the negotiation for a Code of Conduct in the East Sea (COC), hoping the country will continue pushing for the early achievement of a comprehensive COC when it is the co-ordinator of ASEAN-China relations.

Both sides agreed to facilitate visits and people-to-people exchanges and maintain bilateral co-operation mechanisms, including the joint working group on ocean-related affairs and defence policy dialogue.

Host and guest expressed their determination to remove barriers regarding trade and investment, and work together to hold the third meeting of the commission this year.

The Philippine Foreign Secretary pledged to make it easier for Vietnamese fruits, vegetables, cattle and fowl meat to enter his country soon.

The two sides promised to improve the efficiency of co-operation in other fields like education-training, labour, transportation, science-technology, culture-tourism, and particularly marine issues and fishing.

On the East Sea issue, they vowed to consistently follow the principle of peacefully settling disputes in line with international law, including the 1982 UN Convention on the Law of the Sea (UNCLOS).

The leaders stressed the necessity to enhance trust and the importance of non-militarisation, refraining from actions that could increase tension in the East Sea.

They vowed to offer mutual support and maintain regional solidarity in the full implementation of the Declaration on the Conduct of Parties in the East Sea, as well as negotiations on reaching a practical, effective COC in the East Sea in line with international law and 1982 UNCLOS.

Following the talks, the two ministers signed a memorandum of understanding on co-operation between the two foreign ministries. — VNS