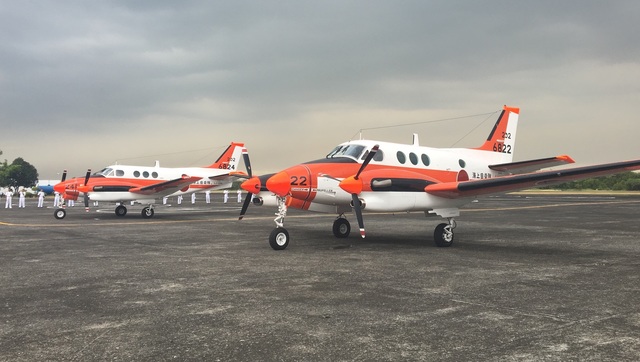 CAVITE, Philippines (UPDATED) – The first two TC-90 patrol aircraft from Japan were turned over to the Philippine Navy on Monday, March 27, seen to boost the capability of the ill-equipped navy to conduct maritime aerial reconnaissance.

“The Philippine Navy is very excited [about] the addition of the TC-90s to its inventory of assets. These aircraft shall perform critical roles in the mandates of the Philippine Navy, particularly in the aspect of maritime security and territorial defense,” said Philippine Navy chief Vice Admiral Ronald Joseph Mercado during the ceremony.

Tokyo sees Manila as an important ally as it seeks to deter Beijing’s aggressiveness in the South China Sea.

“The Philippines is a politically important nation for Japan as it is located in the sealane of communication of Japan as we are faced with many security-related issues in Asia Pacific including those in the South China Sea. Our cooperation with the Philippines for regional security and stability is now even more significant,” Wakamiya said in his speech.

It is the first batch of the total 5 Beechcraft TC-90 King Air advanced trainer aircraft that the Japan Ministry of Defense (JMOD) agreed to lease to the Philippine military in an arrangement with the previous Aquino administration.

The Philippines will pay $28,000 a year, or about P1.4 million, pending an agreement that will allow Japan to donate the secondhand aircraft.

The TC-90s left Japan last Friday, March 24. They were flown by Japanese pilots and made stops in Laoag Airport and Villamor Air Base before reaching Sangley Point.

The navy has been using its old Islanders to patrol and deliver supplies to military outposts in the West Philippine Sea (South China Sea). The TC-90s are faster and have longer range than the Islanders. – Rappler.com