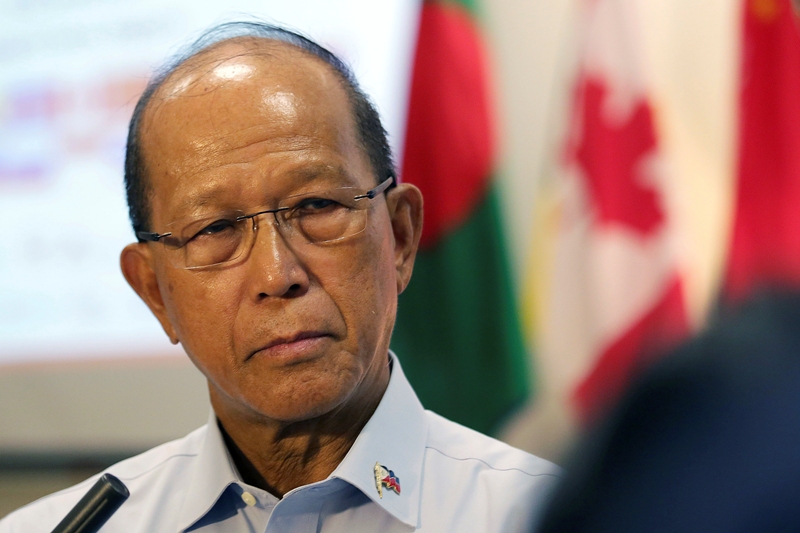 FILE – In this Jan. 25, 2017 file photo, Philippine Defense Secretary Delfin Lorenzana speaks to reporters on the sidelines of the Exercise Coordinated Response (Ex COORES), a multinational Humanitarian Assistance and Disaster Relief table-top exercise with participants from militaries from the Asia-Pacific region, and observers from international, governmental and non-governmental organizations, in Singapore. AP/Wong Maye-E, File

MANILA, Philippines — The Department of National Defense (DND) is open to a greater defense cooperation with its neighbors, including Australia, Defense Secretary Delfin Lorenzana said.

In an interview with the Australian Naval Institute, Lorenzana noted that the country has bigger military-to-military engagement with Australia than any of its Association of Southeast Asian Nations neighbors.

The extent of the relationship between the Philippines and Australia is second to that of the United States, the Defense secretary said.

Lorenzana said that the DND is eyeing to use the military exercises to gain access to the best practices of Australia.

The Philippine government is hoping to acquire equipment from Australia through government-to-government transaction, Lorenzana said.

“Australian military has a lot of things that our AFP currently needs: tactics, best operational practices and defence equipment. Presently, we already have a robust military to military engagement on exercises in the Philippines as well as in Australia through a Memorandum of Agreement (MOA),” Lorenzana said.

The Philippines also sends a sizeable military contingent to Australia to study in their military and civilian school under grants of the Australian Defence Force.

The country may acquire defense capabilities from Australia provided that a MOA on defense cooperation be strengthened.

“In terms of joint military exercises with Australia, I deem it necessary not only to increase interoperability among Allied countries but also to develop inter-military and maritime cooperation,” the secretary said.